Any person who has their primary residence within the boundaries of the Four Creeks Unincorporated Area is eligible to vote in UAC elections.

Voting is done in person at the Election Meeting. 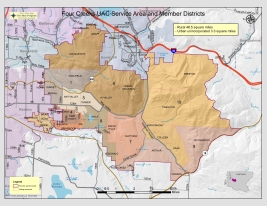 The Four Creeks UAC serves residents of the unincorporated area east of Renton and Newcastle, south of Bellevue and Issaquah, and north of the Tahoma School District. The area covers just under 50 square miles and includes both urban unincorporated and rural areas.

The FCUAC service area is divided into ten Districts, each with one member, with five additional At-Large members.

To determine your precinct, refer to your voter registration card.

These are answers to some common questions about the FCUAC elections:

“Four Creeks used to use mail ballots for elections. Has that changed?”

YES: The cost of using mail ballots has become prohibitive. Other UACs use an Election Meeting for their elections.

“If I don’t get elected, are there other membership opportunities?”

YES: Members may be appointed to positions not filled by an election. The UAC works on appointments between the election and the January meeting when the new membership is seated.

An annual update to the District/Precinct list in the FCUAC bylaws has been proposed.  Vote on the changes is scheduled for the September, 2013 regular FCUAC meeting.

Although FCUAC elections since 2011 have been done at the regular November meeting, the UAC does maintain procedures for conducting a mail ballot election if warranted in the future.  In addition, although not directly a part of the election process, appointments are closely related so the procedure is included here.